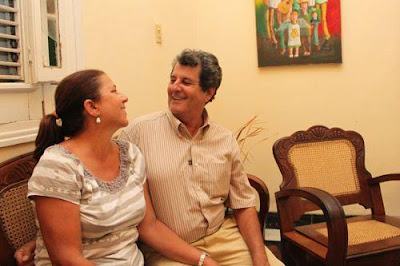 Oswaldo and “Ofelita” in 2010. From Along the Malecon

I published this post originally in Spanish. The good fellows at Translating Cuba translated it into English. Here is the English version.

It was the summer or autumn of 1984. Father Juan de Dios — who is now a bishop and yesterday celebrated the first funeral mass for Oswaldo Payá — chose several people to prepare a document that summarized what was said by Havana Catholics over the previous months in hundreds of meetings preparatory to the Cuban National Ecclesiastic Meeting (ENEC). The commission consisted of two priests — Juan de Dios and Father René Ruiz — and four laypeople: Oswaldo Payá, Ofelia Acevedo, Gustavo Andújar and this scribe.

For several months we met two or three times a week in the Church of San Juan de Letrán. Father Yeyo, the son of a former chef at the Havana Hilton and pastor of the church, didn’t stop complaining about our meetings (joking or serious?), but he prepared us snacks and exquisite dinners from his father’s old recipes.

Oswaldo was thirty-two years old with the nasal voice that later the whole world would hear, and wore little hick shirts and tacky pants, and gave the impression that none of that mattered in the slightest. Ofelita — we all called her that — had Bambi eyes and Isabella Rossellini skin: she had a beauty that took your breath away. Its delicacy hid the immense courage she would later demonstrate so many times, and could say things that would also take your breath away. She is one of those women who, when they enter the room, men lower their voices and tuck in their shirts.

During breaks and over dinner in those months I had dozens of conversations with Oswaldo. We talked about the subject that occupied us (the ENEC), of course, but also about Poland, Lech Walesa, the fate of Cuba, the political prisoners, about Valladares who had married Oswaldo’s cousin…

We agreed that communism was evil nonsense, but I thought it was immutable. Oswaldo Payá, no: he was the first person who told me, with absolute conviction, that communism could be overcome and that we had to do something to save Cuba from the disaster. I told him I thought he was a dreamer. History, to the infinite joy of both of us, would prove Oswaldo right.

But what fascinated me was his cheerfulness and his desire to do good. Oswaldo was the guy you would choose to go with to see a ballgame or a hopeless war. With him you always knew who you had at your side. And I imagine it was this that Ofelita saw with those eyes of hers today brimming over with tears, because a little while later they got engaged. She couldn’t have falling in love with his hick shirts and his fifties haircut, but with his capacity to imagine a better future and his courage to pursue it.

In Cerro parish, where he practiced his faith his whole life, they married in 1986. I remember that instead of entering the church to the Wedding March of every wedding, they chose a liturgical song: “People of kings.” I remember the crowded church, like today, but overflowing with joy. Because that day, like in the movies, the mischievous boy had conquered the most beautiful girl in school.

Years later, in 1991, we met at the “First Day Social,” an event for lay Catholics organized by Dagoberto Valdés. It had been some time since I’d seen Oswaldo, who was already, by then, a known and persecuted dissident. At lunchtime, when I approached his table, Oswaldo, sarcastically, was saying to someone, “Don’t sit next to me, you’ll get in trouble.” Then he raised his eyes and saw me, laughed and said, “Come, sit here, not even a miracle can redeem you.” And it was if no time at all had passed since our conversations at San Juan de Letrán. A few months later I left Cuba: we never saw each other again.

Oswaldo Payá’s death is devastating for his family, friends and colleagues, but a disaster for his country. His courage, his political talent and consistency are always precious, but more so in a country worm-eaten in its vital essence. May God help his wife and children who, in these days, have given us a lesson in integrity and dignity in the midst of tragedy. May God help us all, because to some extent, we will all pay the price of his absence.